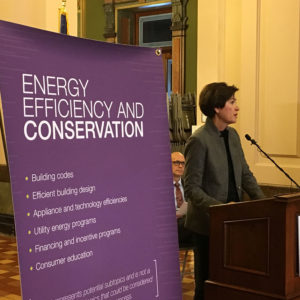 “This plan is comprehensive, looking at all of Iowa and considering all of the opportunities in front of us,” she said during a statehouse news conference.

The report spans more than 100 pages. A top priority is continuing to promote a “diversity” of energy sources, including wind power and plant materials which can be an ingredient for biofuels.

“Our companies and citizens have access to energy affordability and reliability with some of the lowest energy costs in the nation and that reality is something that state leaders and stakeholders absolutely can’t take for granted,” Reynolds said. “It’s why this energy plan is so important because it will help us ensure Iowa will continue to lead well into the future.”

The plan also calls for promoting new energy technology, like cells that can store the power generated by wind turbines. Developing a more modern power grid is also mentioned in the plan. The report does not outline state spending plans for these initiatives. It doesn’t call for legislative action either.

“In other words, we didn’t want to create a plan that had a bunch of governmental mandates,” Reynolds said.

The report outlines 15 objectives. Iowa Economic Development Authority director Debi Durham said shoring up the workforce pipeline is part one of them.

“We must ensure that Iowa is able to attract and train the professionals we need to meet the state’s future energy needs,” Durham said during the news conference.

Mark Lowe, the interim director of the Iowa Department of Transportation, said the report also focuses on the need to “move” energy.

“As energy infrastructure continues to age, capacity is exceeded and new technology emerges, it’s critical to establish a vision for what a modernized grid should look like for Iowa,” Lowe said during the news conference.

State officials have been working on this plan and holding meetings around the state for months. Lieutenant Governor Reynolds said the document revealed today is the starting point for more discussions about improving Iowa’s energy sector.