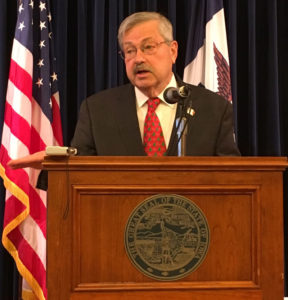 The Des Moines Register has obtained new documents showing the for-profit companies running Iowa’s Medicaid program are complaining about “drastic” losses. One company’s manager describes the process as a “catastrophic experience,” according to the newspaper. Governor Terry Branstad is downplaying the report.

“We’ve been working with them on a collaborative basis and we anticipated that there would be some losses, as they have been in other states,” Branstad says. “And I’ve talked with them individually on this, so we feel very confident that we’re going to be able to sustain the savings that we anticipated when we put the budget together.”

On April 1, the 560,000 Iowans who get their health insurance through government-paid Medicaid were shifted into private “managed care” plans. Three companies are now managing Medicaid patient care in Iowa. In October, the governor authorized paying those companies $33 million more than was outlined in the original contract. According to The Des Moines Register, the companies are saying that’s not enough to cover the losses. Branstad says “there no additional money” being offered to the companies.

“I’m confident that it’s going to work out,” Branstad says.

Branstad’s current state budget plan is based on more than $100 million worth of savings from switching to privately-managed care for Medicaid patients.

A Democrat who’s a member of the state senate says Branstad’s team is managing the program in a “haphazard” way. State Senator Liz Mathis of Cedar Rapids says as a result, the “health and safety of one in six Iowans is at risk” and the program must be fixed in 2017.