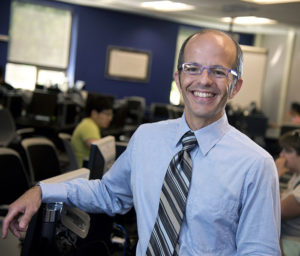 An Iowa State University researcher is part of a team studying online harassment, something almost half of all American internet users have been subjected to in some form.

Rey Junco professor of education and human-computer interaction, says this study is in its early stages and they’re still working to develop a good definition.

Junco says, “Certainly, harassment involves someone being targeted and nasty things being directed at them.” It can include: cyberbullying, racial slurs and sexually-charged comments in multiple venues, from discussion forums and news websites to video games and social media.

While some 140-million of us have been harassed online, there’s still much to be learned about the root causes of such harassment, the impact and how best to intervene and prevent it from happening. “I’m looking at a specific kind of harassment,” Junco says. “I’m looking at the re-sharing of sexually-explicit images that are shared in confidence. I’m just at the beginning stages of looking at some personality factors and some psychological factors that predict harassment.”

“First is to get a sense of how often this occurs and the different ways in which it occurs,” Junco says. “For instance, whether people re-share these images when they’re still in a relationship or after they break up, for instance.” Some people turn to harassment as a weapon as they’re more anonymous online and may be more likely to say something using a keyboard that they wouldn’t say face-to-face.

In order to best study the issue, researchers are working to connect with people who have left social media because of harassment. Some schools and news organizations may shut down comment sections or ban access to certain websites due to harassment, which he says may do more harm than good.