You are here: Home / Fires/Accidents/Disasters / Riverside mayor says site of fatal fire was not zoned for residential use 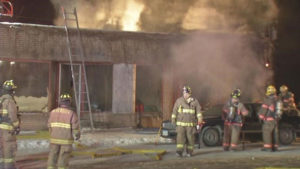 A woman died in this fire in a building in Riverside.

The mayor of Riverside, in southeast Iowa, says the city was not aware a person was living in a downtown building that caught on fire this week.

A woman died in the fire Monday night. Friends of 52-year-old Tracy Williams say she was the girlfriend of the person who was living in the building. Riverside Mayor Allen Schneider told KCRG-TV the building was zoned for commercial use only.

“My understanding of the ordinance in the downtown area is that residential is not allowed on the ground floor,” Schneider said. Records from the Washington County assessor also list the building in Riverside as vacant.

In the neighboring town of Washington, building and zoning administrator Steve Donnolly says the zoning policies are put in place for a good reason. “Most of the codes we have with the building code and the fire code is to protect people,” Donnolly told KCRG. Schneider says, moving forward, he and other officials in Riverside will do all they can to make sure something like this doesn’t happen again.

“(We’ll look at) what we do as a community to make sure that we’re there for anyone who needs assistance,” Schneider said. Riverside leaders will discuss the matter it at the next city council meeting early next month.