You are here: Home / Agriculture / Weather was kind to Christmas tree growers this season 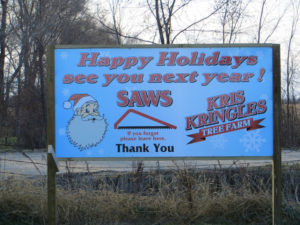 The operators of the 100 or so Christmas tree farms across the state have had a pretty good year.

At the Wickiup Hill Tree Farm near Toddville in Eastern Iowa, operations manager Tim Andrews says they sold out of trees almost two weeks ago. He says working with the trees can be tough.

“This year the weather was warm, so it was enjoyable. Some years it’s downright cold, the opposite of it is during the summertime when we’re shearing the trees, the heat index can be 110 or 115, so it’s not for the weak or faint of heart,” Andrews says.

Andrews is president of the Iowa Christmas Tree Growers Association. He says most farms in the state are between three and eight acres in size and sell trees by the choose and harvest method. That provides a unique experience as the families look through tree after tree to find the one that fits what everyone wants in a tree.

“You cut it down as a family and the parents, the father generally, will take one end of the tree and a child will grab the other,” Andrews says, “and as they’re coming out of the field there’s a shared bond there.”
Andrews says many customers return year after year for the experience.

“You can’t get that by going to the local stores and picking up a tree outside the front door or from dragging a fake tree out of the attic and putting it up,” Andrews says. “And that doesn’t belittle those folks and their Christmas experience. But those folks who do that do that mostly for convenience. After the first time they cut down a live tree with their family they’re hooked for life and that’s something that’s passed on from generation to generation.”

The Iowa Department of Agriculture says nearly 40,000 Christmas trees are harvested across the state each season.