You are here: Home / Human Interest / ‘Pin the Wings on the Goldfinch’ today at State Historical Museum 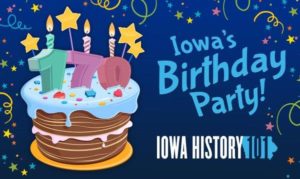 The State Historical Museum is hosting activities this afternoon to mark the state’s 170th birthday. In addition to cupcakes, there are party games, too, like “Pin the Wings on the Goldfinch.” The goldfinch is the state bird.

“As an agency that works hard to connect all three million Iowans to the people, places and points of pride that define our state, we’re proud to celebrate Iowa history and even make some of our own,” says Iowa Department of Cultural Affairs director Mary Cownie.

“The ‘Hands on History’ gallery for children is the first of its kind here at the museum and we’re so excited to let young kids across the state experience it,” Cownie says.

The exhibit is geared for kids under the age of 11. It includes a replica of Iowa’s tallest building — made out of Legos — and a tractor that kids can climb onto. A separate exhibit in the museum features items from famous Iowans, like one of the flight suits Iowa native Peggy Whitson wore in outer space. The track suit an Iowa athlete wore while winning a silver medal in the 1992 Olympics is part of the display, too. The third piece of the “Iowa History 101” effort is a traveling exhibit that features a video narrated by Mike Wolfe, star of the “American Pickers” TV series.

Iowans “share a fascination and pride” about the state, according to Cownie.

“We’re honored to serve as a statewide resource for all of the history, art, film and culture that makes us who we are,” Cownie says.

The artist who sculpts the Iowa State Fair’s “Butter Cow” is leading a butter sculpting class at 2:30 this afternoon at the State Historical Museum, but reservations for that class were snapped up quickly. Tomorrow, the State Historical Museum is hosting art activities for kids and there’ll be a showing of a movie called “The Croods”. It’s an animated comedy. Iowa native Cloris Leachman is the voice for one of the characters.