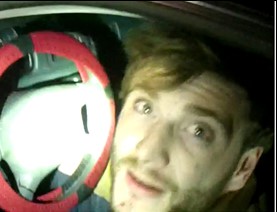 A man is wanted for assaulting a police officer in Urbandale early this morning. Urbandale Police Sergeant Chad Underwood says the officer responded to the report of a possible traffic accident just after 5 a.m. and located a vehicle that matched the description given by the caller. “The officer stopped the car, approached and began talking to the driver, at which time the driver pepper sprayed the officer in the face and fled the scene,” Underwood said.

The suspect is 25-year-old Brandon Bordinat, a convicted sex offender. While police are asking for help in locating Bordinat, Underwood warns he should be considered armed and dangerous. “It appears that this was something he maybe planned out in order to get away and that obviously makes us fearful of what he could possibly do if we try to apprehend him again,” Underwood said.

Bordinat is approximately 6 feet tall and weighs 200 pounds. He is white, with brown eyes, brown hair, and this morning he had a beard. Bordinat’s vehicle license plate is ERX822. “It’s a black, 1998 Toyota Camry with heavy damage to the trunk area and rear passenger lights,” Underwood said. The name of the officer who was pepper sprayed has not been released.