You are here: Home / Human Interest / Iowan is settling in for 3rd mission on orbiting space station (AUDIO) 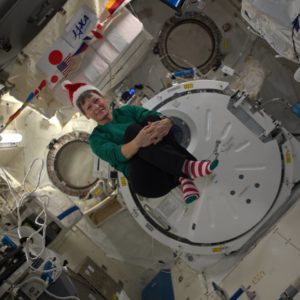 Iowa astronaut Peggy Whitson is about six weeks into her latest six-month mission aboard the International Space Station.

It’s the third stay in orbit for the Beaconsfield native. During her first two missions, Whitson was part of a crew of three but that number has doubled. Whitson is the only woman aboard, sharing the station with five men.

In an interview with Radio Iowa from the ISS, she says so far, she hasn’t felt the overwhelming need for more personal space — in space.

“Since I flew the last time, we’ve probably increased the internal volume by almost 30%, so it’s actually not really feeling very crowded at all up here,” Whitson says. “There’s still many days where I work by myself in a module on a task and the guys are in their own modules and maybe one of the Russians will come down and ask, ‘Hey, where’s Shane?’ and I’m like, ‘I don’t know, have to go look.'”

Several of the new laboratories are the size of school buses and the station overall is roughly as big as a football field. Plus, the famed cupola has been added since Whitson was last there, a large circular porthole through which astronauts can watch the clouds and continents drift past. 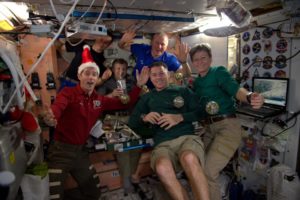 Whitson (far right) and the crew of the International Space Station

“We don’t really feel too crowded here, it’s actually very nice to be able to have an opportunity at mealtimes, usually lunch but always at dinnertime, to get together and talk and share what we’ve been doing over the day, what was hard, what was funny,” Whitson says. “It’s fun to get together at the end of the day.”

During her missions to the station in 2002 and 2007, Whitson said one of her biggest challenges was coping with the monotony of the food. That’s improved, she says, as she shares the truly-international station with just one other American, a Frenchman and three Russians.

“Takuya Onishi, a Japanese guy, was up here before and he didn’t get to eat all of his ‘bonus food,’ so we’ve been tasting on that as well as Thomas Pesquet’s French food,” Whitson says. “We’re having a good time with a little bit more variety than normal. I don’t know how long the leftover Japanese food will last, but hopefully we’ll be able to share more of Thomas’ French food.”

Whitson will turn 57 in February and she’s already the oldest woman ever to fly in space. Also, by the end of this mission, she’ll have spent about a year-and-a-half aloft, more time than any other U.S. astronaut.

In about two months, Whitson will be named commander of the space station, the only woman to hold that position twice.