You are here: Home / Health / Medicine / New pooch at your place? Tips to keep the tail wagging 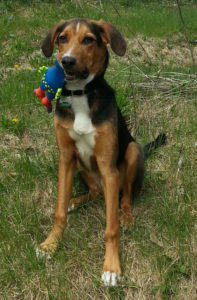 Some Iowans gave puppies as Christmas gifts and it’s important for the animal’s new “master” to know all about the dog’s diet, veterinary care and get signed up for an obedience course as soon as next week.

Lisa Karr, a companion animal specialist, says house-training can be difficult but it isn’t an impossible task.

“A general rule of thumb is to take them out an hour for every month in age, so if they’re two months old, they should go out every two hours,” Karr says. “Taking them out frequently is the best way to potty-train them quicker and avoid those accidents in the house.”

Karr says it will likely take a few months for the pet to adapt to its new surroundings. She has a few tips on making the adjustment easier — for you and for the pooch.

“It’s a really good idea to keep it confined in a space where you can control its surroundings and it’s not going to have access to things you don’t want it to chew up,” Karr says. “Whether you’re keeping it confined in the kitchen or someplace it doesn’t matter if it has accidents, and getting into a training class right away to help teach it and build that relationship will be good.”

Karr says having a routine feeding schedule for the pet is important.

“Kittens are probably okay letting them graze all day. Cats are pretty good at monitoring how much they eat,” Karr says. “Even with puppies, we’re better off meal feeding them so they have the option to eat a little and come back. They tend to forget about the food or they’ll overeat. Obesity, especially in large-breed puppies, can be a big concern later in life.”

A recent report found the number of dogs with diabetes has more than tripled in the past 30 years.