You are here: Home / News / No more lifetime handicapped parking permits in Iowa 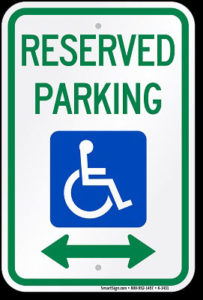 An effort to reduce the improper use of handicapped parking spaces goes into effect January 1.

The State of Iowa will no longer issue “lifetime” handicapped parking permits, those blue plastic placards with a wheelchair symbol in white that are to hang on the rear view mirror when a vehicle is parked in a designated handicapped space.

Mark Lowe, the interim director of the Iowa Department of Transportation, says the DOT has issued about half a million of those “lifetime” permits and they’re supposed to be turned into the DOT when the person dies.

“There are people that use their grandmother’s placard when they’re out driving their car without grandma in the car, so to speak, or that retain placards after somebody has passed away,” Lowe says.

Representative Larry Sheets of Moulton said during House debate of this change that too many non-expiring placards are being used “well beyond the death” of the person who got the permit.

“Such misuse of these placards reduces the chance for a truly needy person from finding an available parking spot,” Sheets said.

“We’ve all seen and experienced and watched individuals park in handicapped spots where they shouldn’t be,” Mascher said.

The state isn’t yanking the “lifetime” handicapped parking permits that are out there, but starting in January, Iowans with a doctor’s recommendation will only be able to get permits that are good for either six months or five years.