You are here: Home / Sports / Iowa edges Michigan in overtime 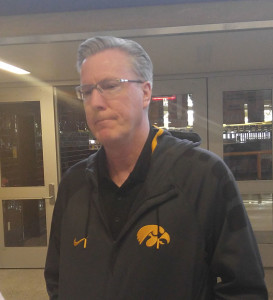 Peter Jok’s three pointer with a minute-18 remaining in overtime gave Iowa the lead for good in an 86-83 win over Michigan in Iowa City. The Wolverines led by seven points midway through the second half before the Hawkeyes rallied to force overtime.

“I couldn’t be more proud”, said Iowa coach Fran McCaffery. “In the first half I did not think we were locked in even though we were up three. I probably challenged them more at halftime of this game than I have in any other game this year and they responded.”

Jok led the Hawkeyes with 25 points, including three of four from three point range. It was the Hawkeyes’ fifth straight win over the Wolverines and the fourth time in the last seven games these teams have played in Iowa City that the game went to overtime.