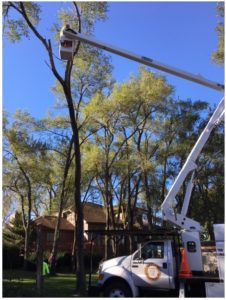 A group of central Iowans who are skilled with chainsaws formed an emergency response team after volunteering together clearing debris in New Orleans after Hurricane Katrina in 2005.

Kim Dreher, co-director of the West Des Moines-based Valley Disaster Relief, says they now focus on responding to local and national disasters as well as removing trees for low-income Iowans.

“We run into a lot of people with health issues or loss of jobs,” Dreher says. “We probably deal with 50 to 60% are single women, either older or raising a family by themselves, obviously, they don’t have the income to take care of a $2,500 tree job, as an example.”

The all-volunteer unit has about 40 members, all from central Iowa, and they’ve put in more than two-thousand work hours this past year on some 200 jobs across the region. Some projects involve simply clearing trees so Habitat for Humanity can build a new house.

They’ve had a great amount of the chainsaws and safety gear donated and also have a “bucket truck” as well as a bus that can hold 11 people and all of their equipment for going on the road.

“If we go to a disaster site, we work with the local governing authorities at that site,” Dreher says. “A lot of times, we’ll hook up with other disaster organizations or we’ll work with a church in the location where the disaster is and they’ll have a list of the people who need help.”

Dreher is a real estate agent when he’s not coordinating jobs for the organization. Whether it’s a tornado, ice storm, hurricane or just an old tree that’s fallen, Dreher says the team is devoted to spreading the word of God through service to those in need.

“We try to have a conversation with the homeowner because it’s really not about cutting up trees, it’s really about stepping out and helping people that have other issues,” Dreher says. “If there’s an opportunity for us to refer somebody to an organization that can help them further, we do that.”

He says listening to people’s stories, hearing about their hardships and praying with them, is often as helpful to them as the physical labor.