You are here: Home / News / As nominee for ambassadorship, Branstad completing ‘a lot of paperwork’ 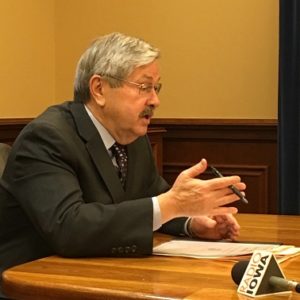 Governor Terry Branstad says he’s completing a detailed questionnaire as part of the process of being nominated by President-elect Trump to be ambassador to China.

“It maybe helps in a sense that most of my life is pretty well-known. I’m not an unknown person, but they want a lot more detail,” Branstad said this morning during a meeting of the Iowa Executive Council.

The questionnaire asks Branstad to list all the addresses where he’s lived for the past seven years.

“They not only want to know where you’ve lived and what you own, but when and how much you paid for it and all of that sort of stuff,” Branstad told reporters during a brief interview after the meeting. “My wife and I own a bunch of post offices…and, then, every investment you have and when you acquired it…so there’s just a lot of detail.”

The information will be submitted to a host of federal agencies as well as the Senate Foreign Relations Committee. Branstad plans to meet personally with each committee member, as each of them will be voting on his nomination to be ambassador to China.

“I’m going to go in for the inauguration and hopefully, maybe, I’ll have some time when to meet with some of the members,” Branstad said.

Branstad expects the committee to consider Rex Tillerson, Trump’s nominee for secretary of state, first. Branstad said Tillerson’s reception from some committee members “could be hotter” than what he may face because some Democrats have announced they’ll vote against Tillerson’s nomination.