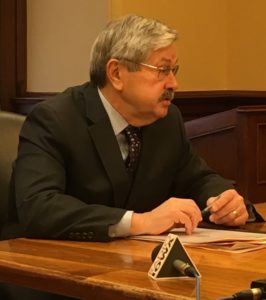 Iowa’s governor says President-elect Donald Trump has reassured him the Trump Administration will be pro-ethanol. Governor Terry Branstad was concerned initially when he heard Trump asked the attorney general from oil-rich Oklahoma to be head of the Environmental Protection Agency.

“Donald Trump told both me and my son, Eric: ‘Don’t worry. He’s going to support ethanol,'” Branstad said earlier today, “so I think that was a discussion he had with him when he was appointed.”

Trump has asked Branstad to serve as U.S. ambassador to China. Mike Fitzgerald, the state treasurer, asked Branstad if he would be “the representative for ethanol” in the Trump Administration.

“One of my new assignments is going to get more ethanol and DDGs sold in China,” Branstad said as the two talked during a meeting of the state executive council.

Dried distiller’s grain is a byproduct for ethanol production and is used as livestock feed.

It’s unclear when Branstad may be confirmed by the U.S. Senate for the ambassadorship. Branstad will attend Trump’s inauguration on January 20 and the governor plans to meet with some members of the senate committee that will hold a hearing on his nomination.