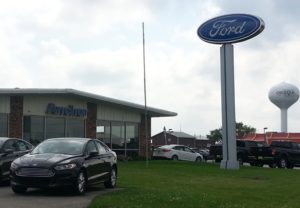 The owner of a Ford dealership in south-central Iowa is facing charges of identity theft after investigators say he was caught trying to steal over $16,000 through false claims of warranty work. Sixty-one-year-old Wil Reisinger, owner of Anchor Motor Company in Osceola, was arrested last week.

Mike Athey, Deputy Director of the Iowa DOT’s Bureau of Investigation and Identity Protection, says the investigation started in August after a former service technician at Anchor Motor made a call to the Iowa Attorney General’s office. “He was alerted that an employee number that Ford had assigned to him was now being used under the auspice of Anchor Motor well over a year after he had actually left employment there,” Athey said.

Police and prosecutors decided to charge Reisinger in connection with the five highest dollar claims, which range from $1,752 to 7,034. If convicted of the charges, Reisinger could face up to 25 years in prison. The DOT could also impose a five-year suspension from the auto dealership business.