You are here: Home / News / Branstad: no furloughs, but layoffs possible in state government 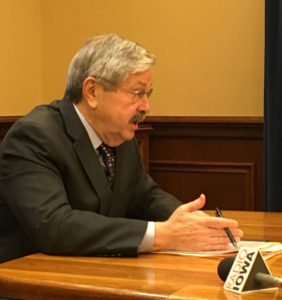 Governor Terry Branstad will release the details of $100 million in cuts to the current year’s state budget on Tuesday.

Branstad will not propose furloughs for executive branch employees, but Branstad’s not ruling out the possibility of layoffs.

“It’ll be up to each agency to determine,” Branstad said Wednesday. “In many cases when somebody retires or quits, we need to review whether that position needs to be replaced or whether responsibilities can be reassigned or combined with another position.”

Branstad is scheduled to deliver the annual “Condition of the State” message to legislators on Tuesday. He plans to release details of his state spending plans at the same time. The governor last month indicated he will not propose cuts in state payments to schools or cuts in the Medicaid program. That means the budgets of state agencies are his likely targets for cutting.

“It’s better to make the tough decisions,” Branstad said yesterday, “and if you can’t live with the budget you have, then you’ve got to make some kind of a permanent decision.”

And Branstad is indicating the cuts he’ll propose for the remaining six months of the current budgeting year will be not be restored in the state budget plan he’s developed for the next year.

Branstad made his comments yesterday during the Associated Press Legislative Seminar at the statehouse.