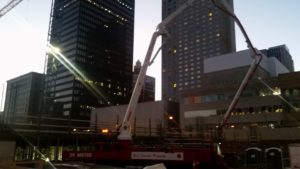 Des Moines is among the Iowa cities seeing a construction boom. (Photo by Jason Robb)

Iowa is seeing a construction boom at the same time contractors are being challenged with a worker shortage.

Chad Kleppe, president and CEO of the Master Builders of Iowa, says the situation will only worsen over the next five years as about one-third of the existing workforce retires.

Kleppe says the worker shortage is changing the way Iowa builders go about their jobs.

“Contractors are, by nature, very creative in how they’re going to meet workforce needs,” Kleppe says. “Obviously, they’re trying to do more with less right now, but in some respects, they’re changing the way they may construct.”

Some contractors in central Iowa are putting pieces of buildings together on manufacturing floors before hauling them to construction sites as a way to save labor.

Kleppe says his association is ramping up efforts to recruit students into considering construction industry careers.

“You can come out of high school and earn while you learn,” he says. “After five years in the industry, you’re making north of $50- to 55,000 with zero college debt.”