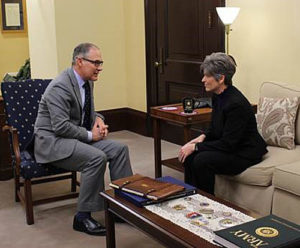 Both of Iowa’s U.S. Senators say they’ve been reassured that the Trump Administration will back the federal ethanol production mandate.

On Thursday, Senator Joni Ernst met with Scott Pruitt, the state attorney general from oil-rich Oklahoma. Trump has nominated Pruitt to serve as director of the Environmental Protection Agency.

“The first thing that I brought to his attention was Iowans’ committment to the RFS,” Ernst says, “and so I asked him point blank if that was something that he would support as director of the EPA and he did reassure me that absolutely he would.”

The Renewable Fuels Standard is the annual mandate for U.S. ethanol production and the figure is set each year by the EPA Administrator. Ernst says Pruitt told her he would follow the law.

“He actually had stated that he felt the last administrator there at the EPA, Gina McCarthy, had actually gone a little overboard in not being as supportive as she should have been because she did not follow the law as intended by making sure that there was a timely release of the volume standard,” Ernst says.

Pruitt expressed an interest in visiting one of Iowa’s ethanol plants, according to Ernst.

“He volunteered. I didn’t even have to ask him if he would be interested in that, so a very exciting converation and I felt it was very productive,” Ernst says.

Pruitt met later in the day with Ernst and other Midwest senators — in Iowa Senator Chuck Grassley’s office. Grassley says he organized the meeting to convey the “importance of biofuels” to Iowa and to the economy and Grassley says Pruitt provided “a very positive response” about the Renewable Fuels Standard.

Iowa is the nation’s leading producer of corn-based ethanol fuel. According to the Iowa Renewable Fuels Association, the 43 ethanol refineries in the state are capable of producing more than four billion gallons of ethanol each year.