You are here: Home / Human Interest / Iowa astronaut takes another walk in space 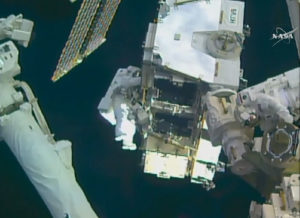 Peggy Whitson (left) on a space walk to replace batteries on the space station.

Iowa homeowners sometimes need to change the batteries in their smoke detectors, but if your home is the International Space Station, changing batteries is a lot more complicated.

Today’s six-hour spacewalk is the first of the mission for astronaut Peggy Whitson, a native of Beaconsfield, and crewmate Shane Kimbrough.

They were tasked with changing out several lithium-ion batteries that power the mammoth space station, but each pair of batteries is about the size of a refrigerator, not that it’s a problem in zero-gravity.

The astronauts are tethered to the station and they wear jetpacks should the tether break. They’re 250 miles up with the earth zooming by between their toes at five miles per second.

Whitson is continually setting records. At 56, she’s now the oldest woman to walk in space and she’ll turn 57 next month. 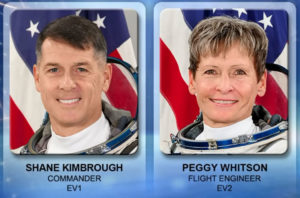 This EVA — or extravehicular activity — is her seventh, which ties her with fellow American Suni Williams for the most spacewalks by a woman. Whitson will break that record during the next few months.

She’d already logged 377 days aboard the orbiting station during missions in 2002 and 2007 and she’ll set another duration record before coming home.

In an interview with Radio Iowa from Russia before launch in October, Whitson was asked which of her many accomplishments make her the most proud:

“I really feel very privileged and honored to be able to participate in the space program at all,” Whitson says, her voice cracking. “That’s what I’m most proud of.”

With the next crew rotation, Whitson will be promoted to commander, the first woman to command the station twice.