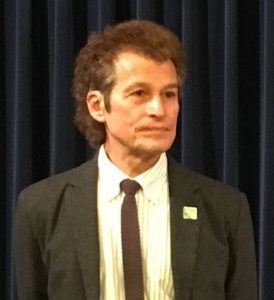 State officials and volunteers say there’s been an “explosion” of human trafficking in Iowa. George Belitsos of the Iowa Network Against Human Trafficking says the internet is “fueling” the growth.

“Today human trafficking is the fastest growing crime in the world,” Belitsos says, “and Iowa’s a literally at the crossroads for trafficking with Interstate 35 reaching U.S. borders to our north and south and Interstate 80 reaching borders to the east and west.”

The illegal drug trade and human trafficking networks “overlap” according to Belitsos.

“However, you need to know this,” Belitsos says. “Traffickers are making more money from human trafficking than drug trafficking.”

Belitsos recently retired from his job as the CEO of a non-profit child welfare agency and he describes ending human trafficking as his “new cause.”

“The undeniable truth is human trafficking occurs in Iowa and has been here for many years,” he says.

The governor has declared January, 2017 as the first-ever “Slavery and Human Trafficking Awareness and Prevention Month” in Iowa. In the past five years, Governor Branstad and legislators have acted to strengthen penalties against those caught in the human trafficking trade.

Belitsos says there are now more resources to help those rescued recover. In addition, the state now has a coordinator working to help law enforcement recognize the signs that someone is being forced against their will to work in the sex trade. State officials also have just begun keeping statistics on the extent of the problem.