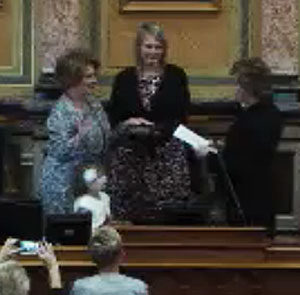 Linda Uppmeyer is sworn in as the Speaker of the Iowa House.

Republicans in the Iowa House say their first order of business will be paring down the present year’s state budget. Republican House Speaker Linda Upmeyer of Clear Lake says the move’s necessary because state tax revenue is lower than expected.

Governor Branstad will formally present his recommended budget cuts to legislators tomorrow, plus he’ll outline his priorities for the 2018 spending plan that lawmakers will draft over the next few months. House Republican Leader Chris Hagenow, a Republican from Windsor Heights, wants to move quickly on the budget-cutting plan for the current state fiscal year.

“We want to pass it as soon as we can,” Hagenow says, “because each day that passes we’re not realizing some of the savings that will be in that bill, so time is of the essence.”

Governor Branstad will recommend at least $100 million in cuts to the current year’s state budget and Branstad has said he intends those cuts to be permanent.

Republicans now control the state senate’s debate agenda, too. Senate Republican Leader Bill Dix has been saying for the past several weeks that voters want legislators to “kick the door in” on state government. Today, Upmeyer offered reporters a slightly more measured prediction of how Republicans will act now that the GOP has total control of the legislative and executive branches of state government.

“I don’t know if there’s going to be a lot of door kickin’, but I do predict that we’ll have new discussions and I think Iowans will give us feedback all along the way,” Upmeyer said during a news conference in her office. “We go home every weekend. We do forums. We talk to Iowans and we confirm that what we’re doing is, in fact, the message that we heard.”

Democrats in the legislature today urged attention to income inequality.

“This institution has the capacity to govern wisely and to take action to make life better for people on the bread and butter issues that Iowans face every day,” said Rob Hogg, the leader of the 19 Democrats in the Iowa Senate.

Mark Smith of Marshalltown remains the leader of Democrats in the Iowa House. He cited rising college tuition costs and stagnant wages as well.

“For far too long the deck has been stacked against everyday Iowans who are working hard, but still not getting ahead,” Smith said during a speech in the House this morning.

Listen to all of what the legislature’s top Republican and Democratic leaders had to say in their opening speeches as the 2017 legislative session started up today here.