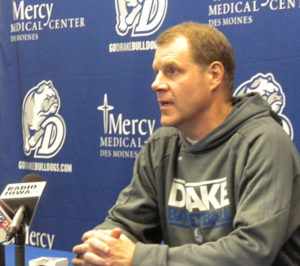 Drake is gaining confidence and a team that opened the season 1-10 is now 2-2 in Missouri Valley Conference play heading into Wednesday’s game at home against Indiana State. The Bulldogs have won three straight home games, including an 88-76 win over Evansville in a game that saw them close on an 18-4 run.

“We can get better in purpose and in execution on both ends of the floor”, said Drake coach Jeff Rutter. “Each person has more room for growth and that is exciting. It is fun to think about and fun to be part of.”

Rutter took over in early December following the sudden resignation of Ray Giacoletti. He says attitude and work ethic has never been an issue even when they were struggling prior to the start of conference play.

“These guys are really pulling for one another and they do not care at all who gets the credit”, added Rutter. “Obviously they all want to play but it is really a united group.”