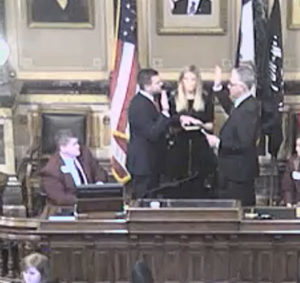 Jack Whitver is sworn in as President of the Iowa Senate.

The Iowa General Assembly begins today with traditions. Twenty-five of the 50 senators were sworn in today for four-year terms.

All 99 members of the Iowa House took the oath of office, each for a two-year term. The 100th member of the House will be chosen late this month in a special election in Davenport.

Each legislative leader was formally elected by their peers to their positions this morning.

Senate President Jack Whitver, a Republican from Ankeny, was first to address his colleagues.

Senator Majority Leader Bill Dix, a Republican from Shell Rock, is the new floor leader, after Republicans secured 29 of the 50 seats in the senate.

Senate Minority Leader Rob Hogg, a Democrat from Cedar Rapids, had his opening day speech briefly interrupted by a capitol-wide test of the emergency alert system.

In the House, Speaker Linda Upmeyer, a Republican from Clear Lake, is the presiding officer for the second straight year.

House Majority Leader Chris Hagenow of Windsor Heights is the floor leader for the 59 Republicans in the House.

Representative Mark Smith of Marshalltown remains as the leader of minority Democrats in the House.