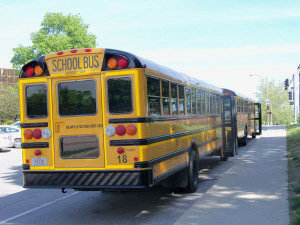 The EPA’s David Bryan says the combined $170,000 in rebates for Iowa will reduce pollutants associated with the buses. “You can imagine buses sitting in front of the school on either a very hot or very cold day and running their engines to make sure their buses are ready for children to get on the bus. We want to eliminate a lot of those emissions,” Bryan said.

The EPA funding in Iowa includes $80,000 for the Lawton-Bronson School District (four buses), $70,000 for Bondurant-Farrar (three buses), and $20,000 for Sioux City Schools (one bus). Bryan notes that many more school districts applied for funding.

“The school has to come up with a matching amount of money and sometimes that’s difficult for schools,” Bryan said. Nationally, the EPA announced awards of more than $7.7 million to replace or retrofit 401 older diesel school buses in 27 states.

Bryan says the new or retrofitted buses reduce pollutants that are linked to health problems such as asthma and lung damage.