You are here: Home / Education / ‘Progressives’ seek to rebuild coalition in Iowa 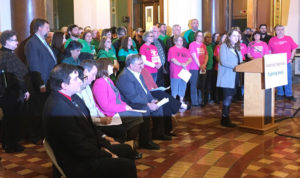 Several groups spoke out today during a news conference at the State Capitol.

A coalition of self-described progressives held a statehouse rally over the noon hour today.

Their aim is to show a united front against a series of steps Republican legislators appear poised to make. Charlie Wishman of the Iowa Federation of Labor AFL CIO said it’s time to “rebuild a progressive coalition” in Iowa.

“Are you ready to stand together and fight back?” Wishman asked the crowd and the statehouse rotunda, getting shouts of “Yeah!” as well as applause and whistles in return.

Erin Davison-Rippey of Planned Parenthood of the Heartland told the crowd the legislature is “controlled by right wing extremists.”

“Defunding Planned Parenthood would set in motion a health care crisis in our state,” she said, “leaving tens of thousands of Iowans without access to crucial care like routine cancer screenings, birth control and STD testing.”

Mary Jane Cobb, executive director of the Iowa State Education Association, warned Republican legislators may try to “divert” state tax dollars from public schools to parents who home school their children or send their kids to a private school.

“Let your legislator know that you support quality public schools because you know that that matters to your life and to the lives of everyone else in the state of Iowa,” Cobb said.

Danny Homan, president of AFSCME Council 61 — the union that represents the largest group of state workers, pointed to the state’s flag and its motto, which is “Our liberties we prize and our rights we will maintain.”

“Defend our rights and not let them be taken away from us by a party or a group of people who wants to push an agenda that is only serving to them and to their donors,” Homan said. “Please! Please! That’s our flag. Let’s go defend it!”

Other speakers criticized the GOP’s water quality plan and efforts to require a photo ID for voting. A spokesman for the League of Latin American Citizens called it a “voter suppression” effort.