You are here: Home / News / Branstad sentimental as he prepares to deliver annual speech 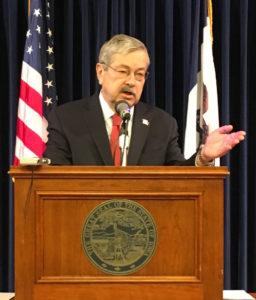 Governor Terry Branstad delivers what is likely to be his final “Condition of the State” address to legislators later this morning.

Branstad and his staff have been drafting a state spending plan that will be released today. Branstad’s also planning a “smaller, smarter government” initiative that could significantly reduce the number of state boards and commissions.

All that state-level policy stuff has been happening as Branstad prepares for his new role as U.S. Ambassador to China. Branstad’s daughter, son-in-law and their two children are tentatively planning to live with the governor and his wife to China.

“There’s still a lot of unanswered questions that we have. We have gone online and we’ve seen pictures of the embassy and the residence,” Branstad said during an interview with Radio Iowa. “It’s in Beijing.”

Branstad believes his daughter Allison, her husband Jerry Costa and his granddaughters Sofia and Stella will be able to live in a guest house on the embassy grounds. Branstad and his wife, Chris, are hoping their two sons and their families will be able to visit.

“It’s a long trip and it’s not cheap to get to China and back and, of course, we hope to get back here, too,” Branstad said, “maybe a couple of times a year.”

Branstad admits one concern for him and his family will be the air quality in Beijing. The embassy Branstad will oversee has 2,000 employees.

“The biggest American embassy in the world,” Branstad said. “And there’s five consulates that I’ll have the responsibility I’ll have of overseeing as well, regionally throughout China.”

Branstad can properly pronounce the name of China’s president and a few of the cities he’s visited during trade missions to China.

“I know a few things,” Branstad said, like how to say ‘Thank you,’ in Mandarin. “There will be interpreters, but I hope to learn more.”

Branstad said late last week that he hasn’t had time to learn much Mandarin.

“Right now I’m practicing for the ‘State of the State’ speech, to tell you the truth,” Branstad said, with a laugh. “And I’m focusing on my responsibility as governor.”

Branstad has just completed his 22nd year as governor.

“I love this state and it’s been a great honor and privilege to serve as governor and to serve as long as I have and so, yeah, I am sentimental,” Branstad told Radio Iowa. “The House chambers is where I started as a state representative.”

The House chamber is where Branstad will speak today, starting at about 10 a.m. Branstad was a legislator for six years before his election in 1978 as Iowa’s lieutenant governor. He won his first term as governor in 1982. In 1986, Branstad and legislators dramatically reduced the number of state agencies.

“This time we’re really going to focus on boards and commissions and some of the overreach that we’ve seen there,” Branstad said.

The governor faults some state boards for creating some “ridiculous” regulations.

“All of these boards and commissions have been sold on to the legislature as protecting the health and safety of the citizens,” Branstad said, “but too often they become there to protect the profession of the people that are in it and to keep competition out and that also drives up the cost to the consumers and so we think there’s a good opportunity to review all of that.”

Branstad cited the State Health Facilities Council that reviews requests for hospital expansions. Branstad said it seems to him some hospital executives have been more interested in keeping competition out than in serving patients.

“Then they cut deals like we saw in West Des Moines where the two big hospitals both built a (new) hospital less than a block apart,” Branstad said. “It certainly wasn’t what goal of the ‘certificate of need’ was. It was supposed to reduce health care costs. It hasn’t worked that way.”

Under current Iowa law, hospitals have to submit applications to the Department of Public Health to get a “certificate of need” before hospital facilities can be expanded. In addition to expanding bed or patient space, Iowa hospitals, nursing homes and outpatient surgery centers must get permission from the State Health Facilities Council to buy medial equipment that’s worth more than $1.5 million.