You are here: Home / News / Branstad’s 2017 Condition of the State focuses on ‘new dynamics’ at capitol 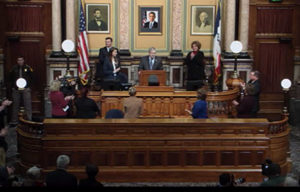 At this hour, Governor Terry Branstad is delivering what is likely his final “Condition of the State” address to lawmakers.

“Today, America and Iowa exist in a challenging world, but we must seize the opportunity to make it a better place,” Branstad said according to prepared remarks, mentioning his upcoming assignment as ambassador to China.

Republicans have led the legislative branch of state government during just two years during Branstad’s 22 year tenure as governor. He pledged to work with Republican legislators who control both the House and Senate for quick action on a host of issues, and invited the 22 new legislators to his office for a personal meeting before he leaves for China.

“All students need to learn how computers operate because it is fundamental to life and work today,” Branstad said, according to prepared remarks. “…No student should miss out on this opportunity because of where they live.”

Several of Branstad’s policy plans are geared to build on the new expectations in the legislature now that Republicans are fully in control and, as expected, Branstad spent part of his speech outlining proposed changes in Iowa’s collective bargaining law.

Branstad’s call in the speech for “smaller, smarter government” is targeted toward state boards and commissions. Some may be merged. Others eliminated or their regulatory powers will be reduced. Branstad’s also calling on legislators to address the spike in traffic fatalities. He’s asked for enhanced penalties for drivers caught texting behind the wheel, plus new 24/7 state monitoring of habitual drunken drivers.

“The budget reductions I am recommending for this fiscal year are difficult, but they maintain funding for our mutual priorities,” Branstad said.