You are here: Home / Agriculture / Bumble bee that once flourished in Iowa goes on endangered species list 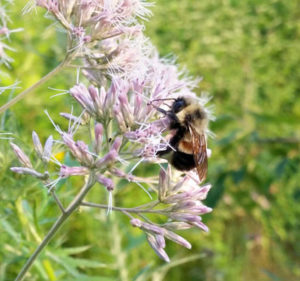 Calling it a “race against extinction,” a bumble bee that was once prevalent in Iowa is going onto the endangered species list for the first time by the U.S. Fish and Wildlife Service.

Serina Jepsen, director of the endangered species program at the Xerces Society, says the rusty patched bumble bee is disappearing and everyone involved with agriculture should be taking note.

“The species will now be protected from some of the threats that it faces,” Jepsen says. “The Fish and Wildlife Service now has the authority to develop a recovery plan and work towards the species recovery. I think this will really make the difference this species needs in terms of its future survival and existence, really.”

The Xerces Society had petitioned the agency for the designation. The native bee is of vital importance as a pollinator, Jepsen says, and its demise can be seen as another sign of significant trouble for the continent’s environment. “The rusty patched bumble bee has declined by about 90% from its historic range,” Jepsen says. “It used to occur across 31 states as well as some Canadian provinces. It now occurs in just a handful of locations and it really only exists in any numbers in a few areas in the upper Midwest.”

Once common as far east as Maine, limited populations of the bee can still be found in Minnesota, Wisconsin, Illinois and Indiana but no significant numbers have been spotted in Iowa in years. The value of native pollinators to agriculture in the U.S. is estimated at $9 billion per year, and that doesn’t count honeybee colonies that can be rented for pollination.

Jepsen says, “These animals together, not just the rusty patched bumble bee, but the rusty patched bumble bee and all of the other native bees that provide pollination to both wildflowers and natural ecosystems as well as our crops, are incredibly important to functioning ecosystems.” She says it’s a thrill to see one of North America’s most endangered species receive the protection it needs.

Jepsen says, “Addressing the threats to the rusty patched bumble bee that it faces, from pesticide use, from disease, from habitat loss, will help not only this species but a wide variety of other native pollinators that are really important to functioning natural ecosystems as well as agricultural systems.”

Offering a landscape that sustains all native bees will require continued investment by public agencies, she says, as well as efforts from private residents in urban and rural areas. The Xerces Society is a non-profit conservation group, headquartered in Portland, Oregon, focused primarily on invertebrates. It’s named for the Xerces Blue butterfly, the first butterfly known to go extinct in North America as a result of human activities.