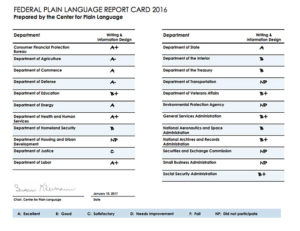 Iowa Congressman Dave Loebsack, a Democrat from Iowa City, released the annual report Tuesday on how well government agencies are doing in communicating with Americans in language they can understand.

He says it doesn’t help anyone if the federal government isn’t able to interact with the people it serves.”I think it impedes the whole purpose of good government,” Loebsack says, “when people try to get some satisfaction from their government and if they can’t even understand what it is their government is saying, then obviously that’s going to be a real problem.”

Loebsack says the annual report card gives agencies grades from A to F on writing & information design. “You’ll see that some agencies as always are doing better then others. I just want to congratulate the Consumer Financial Protection Bureau, the Department of Health and Human Services and the Department of Labor. Each of those received an A-plus,” according to Loebsack. “I don’t recall many A-plus grades for myself when I was in college, so that’s pretty darn good.”

Loebsack says this a good overall report card for the government. “We’re very encouraged that some agencies have taken this law seriously. A record number of agencies scored B or higher, and I am glad that for the second year in a row, no agency got a D or an F. So that is good news,” Loebsack says.

Loebsack says former Iowa Congressman Bruce Braley pushed to have the Plain Language Act passed into law, and Loebsack says he is pleased to be able to carry on that tradition in reporting the grades each year. You find out more on Center for Plain Language website.