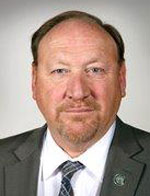 Governor Branstad is urging lawmakers to pass a package of tougher traffic laws, incluing a crack down on texting while driving.

“I’m asking you to take a hard look at these recommendations and evaluate which can be put into law to make our roads safer,” Branstad said yesterday during his “Condition of the State” address.

Branstad said his worry is “distracted” driving and he has proposed boosting penalties for drivers who hit motorcyclists, bicyclists or pedestrians. ists caught texting while driving.

Senator Tim Kapucian, a Republican from Keystone, says the ultimate goal should be “hands-free” cell phone use within a vehicle.

“Most of the newer vehicles have that capability,” Kapucian says. “I’ve always said our professional drivers are required to do that, the truck drivers, and as far as I’m concerned, we’re the amateurs on the road.”

Kapucian is chairman of the Senate Transportation Committee. He expects the panel to review these and other proposals related to distracted driving, but isn’t predicting what may ultimately pass.

At least 402 people died in crashes on Iowa roadways in 2016 and state troopers say excessive speed was a factor in many crashes. Neither the governor nor Kapucian are proposing changes in posted speed limits or suggested increased fines for speeding at this point, but Senator Kapucian is concerned that too many motorists are weaving through traffic and driving too close to other vehicles.

“When I was in drivers’ ed, I specifically remember we were taught to respect the other driver,” Kapucian says, “and it just appears we’re in a ‘me first’ world today.”

Governor Branstad discussed traffic safety near the end of his “Condition of the State” message yesterday. The governor read part of a letter from the parents of a bicyclist who was killed by a motorist who was texting while driving.