You are here: Home / Sports / Kennedy and White dismissed from Iowa coaching staff 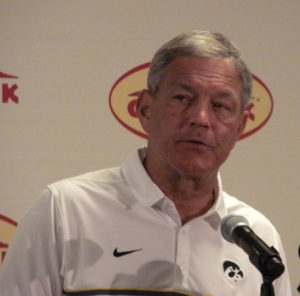 More changes on the offensive coaching staff at Iowa. Hawkeye coach Kirk Ferentz announced Thursday that Bobby Kennedy and Chris White will be leaving the Hawkeye program after four years.

“I want to thank Coach Kennedy and Coach White for their efforts and contributions to the University of Iowa and our Hawkeye football program,” said Ferentz. “I wish Bobby and Chris the very best as they move forward in their coaching careers.”

Kennedy has coached Iowa wide receivers, while White has coached running backs and special teams. Both Kennedy and White joined the program in 2013. The changes take effect immediately.