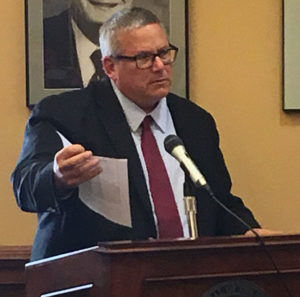 President-elect Donald Trump has filled all of his cabinet posts but one: Agriculture Secretary.

Iowa Ag Secretary Bill Northey says while many people are concerned about the delay, he’s hoping it just means Trump is being “thorough.” Filling the top job at the U.S.D.A. soon is important, according to Northey, because all of the political appointees within the agency will be leaving those jobs on January 20.

“So, it would make sense to have that happen as soon as we can, but I guess the most important thing is to get the right person in that job,” Northey says. Earlier this week, via Twitter, Iowa Senator Chuck Grassley suggested Northey be named the new leader of the U.S.D.A..

“That’s certainly very nice and it’s a great compliment from Senator Grassley,” Northey says. “He’s so well thought of, so to be mentioned by him, that was a nice thought.” But, Northey says his phone “hasn’t been ringing,” so he doesn’t believe he’s being considered for the job.

Northey has praised former Iowa governor Tom Vilsack, the outgoing Secretary of Agriculture, for being a strong spokesperson for farmers, renewable fuels, biotechnology, and trade. But, Northey suggests the next leader of the U.S.D.A. should roll back regulations.

Northey, a Republican from Spirit Lake, has been Iowa’s Agriculture Secretary for the past 10 years. He says he would be interested if he is asked to become the lieutenant governor when Kim Reynolds takes over as governor.

(Thanks to Darin Svenson, KDEC, Decorah)