You are here: Home / Military / Senator Ernst questions nominee for Secretary of Defense 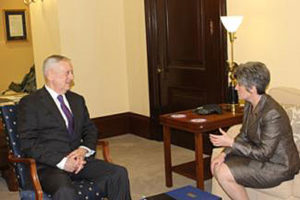 Senator Joni Ernst in an earlier meeting with James Mattis.

The Republican from Red Oak started by asking several yes or no questions of Mattis during the Senate Armed Services Committee hearing.

She also asked if he would commit to giving her advanced notice of any changes to the gender integration policies that are in place. “I will always keep this committee informed, mam,” Mattis replied. Ernst went on to ask Mattis about dealing with ISIS.

“How should our new administration address the rising threat of ISIS in southeast Asia, and will you commit to working with me on this sir?,” Ernst asked. “Absolutely Senator,” Mattis replied, “the way we do this, I think we have to deliver a very hard blow against ISIS in the middle east so there is no sense of invulnerability or invincibility there.”

Mattis says the plan to deal with ISIS has to go beyond attacking and destroying them in the Middle East. “So you don’t squeeze them in one place and then they develop in another and we are right back to square one,” Mattis says. “We’ve got to have an integrated strategy on this — and it’s got to be one that goes after the recruiting and their fundraising as well as delivering a military blow to them in the Middle East.”

Ernst, who is the first female combat veteran to serve in the U.S. Senate, also asked Mattis about upgrading the ammunition used by the military to be able to better deliver a punch to the enemy.