You are here: Home / Agriculture / Temple Grandin to give keynote at Davenport autism conference (audio) 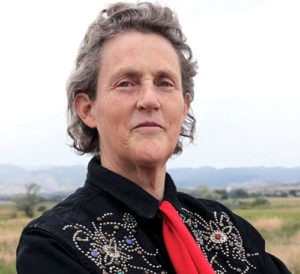 The keynote speaker at an autism conference tomorrow in Davenport is a globally-known author, activist and innovator — and she’s also autistic.

More than half of all cattle across North America are handled in humane systems designed by Temple Grandin. The animal science professor at Colorado State University says before the conference, she’ll meet with Quad Cities FAA members to talk about livestock handling and with high schoolers in general to encourage them to give serious thought to their future professions.

“I’ve been working on how to get some of these kids that might be labeled as autistic, dyslexic, ADHD, whatever, on getting them into good careers,” Grandin says. “Schools have taken out skilled trades. I think it’s the worst thing they’ve done because there’s a ton of jobs available in things like auto mechanics and welding. Hands-on classes saved me as a kid.”

Grandin didn’t speak until she was almost 4 years old. “My art ability was always encouraged. I was building things when I was in high school and those abilities helped me in my career designing livestock facilities,” Grandin says. “It’s just so important to find something the kid’s good at and then work on developing it.”

Grandin is a hero to thousands with autism and their families and she’s widely celebrated as one of the first people on the autism spectrum to publicly share insights about her personal experience. In 2010, she was named by Time magazine among the Top 100 Most Influential People in the World. Her goal is to pass along what she’s learned to the next generation — and the next.

“I’m seeing too many smart kids not learning basic skills,” Grandin says. “They need to learn working skills. When I was 13 years old, my mother got me a sewing job and when I was 15, I was cleaning horse stalls and taking care of a horse barn. That taught me really important work skills, be on time, be reliable, take responsibility.”

Grandin says kids also need to be taught basic social skills and table manners. In 2010, HBO aired a semi-biographical movie called “Temple Grandin” starring Claire Danes as Grandin. The network did a “fantastic” job with the film, she says.

“They show exactly how visual thinking works and they also showed hard work is required,” Grandin says. “It was not easy. I had to work really hard. A really nice superintendent at the Swift plant said to me, ‘You always have to keep persevering,’ and a cattle buyer told me, ‘The trouble is opportunity in work clothes.’ It was really hard at the time but I really thank those people for supporting me.” Her mantra is that people with autism are “different, not less” and, often, “different and, in many ways, more.”

The conference runs all day Friday at The RiverCenter in Davenport.