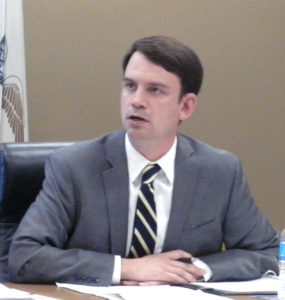 The Department of Education released its third annual Iowa School Report Card Thursday. Department director Ryan Wise says it’s designed to give a look at individual schools within a district.

“You do see some schools that improved and some schools that declined in terms of their overall ranking,” Wise says. “You also see a slight overall shift downward this year — because there was statewide dip in test scores.” The schools don’t get a letter grade, they instead are given rating.

“Ranging from exceptional, high performing, commendable, acceptable, needs improvement, and priority And those ratings are created by a school’s performance in a number of areas related to student proficiency, student academic growth, attendance, graduation rates, staff retention. Those different measures compiled together make a school’s overall rating,” according to Wise.

He says some minor changes were made this year to include more schools in scores and ratings. Wise says they also added two categories in how schools are judged on closing achievement gaps. “In the previous year we looked at achievement gaps for students who had individualized education plans, who received free and reduced priced lunch or who were English language learners. We’ve added in two measures that also look at achievement gaps along racial and ethnic lines, so for students from diverse backgrounds,” Wise says.

The report card also includes a new summary review of efforts to get parents involved. “We’ve included a statewide survey of teachers on their practices in engaging parents and parental involvement,” Wise explains. “That addition isn’t scored this year — but it does provide another level of information for parent to look at in reviewing their school’s report card.”

Wise calls the report card a starting point for parents to evaluate their schools. “Parents shouldn’t stop at the ratings. They should use this as an opportunity to really engage with their childrens’ school. To say ‘tell me more about’ the areas that they are most interested in,” he says.

Wise also sees the report card as something school administrators and staff can use. “I hope that it will be a positive valuable tool at building level for principals to engage with their staff and say here’s where we’ve improved, hear a re things we think have contributed to that growth, here’s where we still face challenges — how can we continue to make progress in those areas?,” Wise says.

You can find the report card and your school’s rating at: www.educateiowa.gov/schoolreportcard. Wise says improvements will continue to the Iowa School Report Card, particularly after Iowa finalizes a new state plan for school accountability and support under the federal Every Student Succeeds Act, which replaced the No Child Left Behind Act.