You are here: Home / News / Legislator measures duration of ovations with a clapping cadence 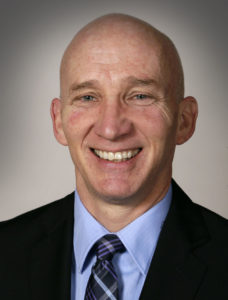 One member of the Iowa House has a unique method for measuring the applause during big statehouse speeches.

The chief justice of the Iowa Supreme Court gave a speech to legislators Wednesday. He got a long ovation at the end. If you were listening closely to Representative Walt Rogers of Cedar Falls, he was clapping in a distinct rhythm.

“I went to Columbus, so it’s probably a common one at Columbus in Waterloo. ‘Let’s go Sailors. Sailors, let’s go!’ Took me back to high school,” Rogers said, with a laugh, when asked about his clapping after the speech was over.

Rogers has used that cadence to measure the duration of ovations during speeches he’s witnessed as a member of the Iowa House.

“So I keep track of who has the longest number of cadences and it’s been Governor Branstad, twice,” Rogers said.

The longest ovation Rogers measured happened this past Tuesday. Rogers counted 14 and a half rounds of his cadence as Governor Branstad was applauded for his final “condition of the state” message. Rogers has been a member of the Iowa House since 2011, so he’s heard 20 formal speeches in the past six years — the annual “Condition of the State” messages from former Governor Chet Culver and current Governor Terry Branstad as well as yearly speeches from the leader of the Iowa National Guard and the Iowa Supreme Court’s chief justice.

“When you’re here for long speeches and those type of things, I guess I do think just to kind of break of the monotony of what those things entail…a clap cadence has always done that for me,” Rogers said.

This week Rogers moved into a new desk on the Iowa House floor, right in front of the press bench. He told the reporters who noticed his clapping that no one in the past six years had picked up on his habit — and that’s fine with him.

“I don’t really want anybody to join in because it would be kind of weird if we were all clapping that way,” Rogers said, with a laugh. “It’s just kind of for me and my own fun.”