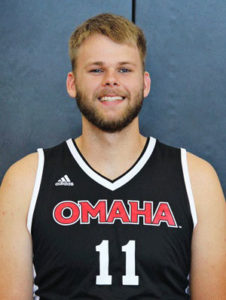 A southwest Iowa native who plays on the wheelchair basketball team at the University of Nebraska at Omaha has been selected for the U.S. Men’s World Championships Team.

Brent Regier, of Woodbine, is a junior at UNO and he’ll travel with the team to Argentina for a qualifier later this month.

“It’s really exciting to be a part of this team and only have been playing the sport for a few years,” Regier says. “It’s really cool to be able to participate at such a high level so quickly with a bunch of other players from across the country who share the same passion for the sport.” Regier and one of his UNO teammates — Jeromie Meyer of Henderson, Nebraska — were just notified a few days ago they’d made the 12-member national team.

“We had a training camp this past week in Colorado Springs where they invited in about 30 other guys from across the country who they thought might be a good fit for the team,” Regier says. “They narrowed it down to 12 of us that are able to travel this last Saturday we found out.” Regier says he’s ready for this latest challenge.

“I won’t have to prepare too hard,” Regier says. “Coach Mike had us in good shape and taught us the fundamentals and everything we needed to know going in. The biggest part there was just pushing hard the whole time and really being committed to the cause.”

The team will travel to Buenos Aires, Argentina for the International Wheelchair Basketball Federation Continental Qualifier running from January 22nd to the 29th. The top two teams will go on to the world championships, scheduled for June in Toronto, Canada. Team USA has reached the championship game in three of the last five world championships, winning the title in 2005 and 2009.