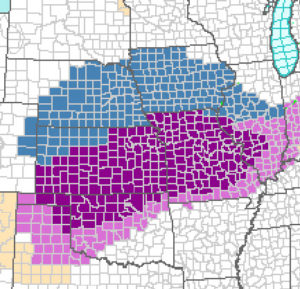 The blue areas of this NWS map indicate a Winter Storm Watch, while the purple areas are warnings for freezing rain and ice.

A massive winter storm system that stretches 1,000 miles from the Great Plains to the Mid-Atlantic states threatens to coat a wide section of Iowa with a layer of ice later this weekend.

Meteorologist Kurt Kotenberg, at the National Weather Service bureau in metro Des Moines, says most of the state is now under a Winter Storm Watch.

“Confidence is very high right now that we’re going to have that wintery system come in sometime around Sunday afternoon into Monday morning and afternoon,” Kotenberg says. “There’s going to be some notable impacts with this, especially during that Sunday night-to-Monday morning period where we could see freezing rain and ice accumulation of up to a quarter-of-an-inch across central and southern Iowa.”

Since temperatures will be hovering around the freezing mark, much of the precipitation may fall as rain or freezing rain but likely -not- as snow, though parts of northern Iowa (north of Highway 20) may see an inch or so of snow. He predicts ice will cause the most trouble with this storm.

“The most ice will likely be accumulating between midnight and 6 a.m. or so Monday morning,” Kotenberg says. “Unfortunately, we’re likely going to wake up to icy roadways across Iowa. Temperatures, we’re going to stay near or below freezing during that morning commute and I don’t see it melting off anytime soon.”

Thick ice can build up on tree limbs, causing them to break and fall on power lines, bringing outages. If you have a generator, gas it up, as electric outages could be widespread. The commute to start the week could very well be a mess.

“Be prepared now and make sure you’re ready to go Monday morning,” Kotenberg says. “If you do have to head out, be ready for the slippery conditions on the road, slippery sidewalks and plan on taking it easy on the roadways because travel will likely not be pleasant Monday morning.”

On the plus side, winds are forecast to be very light, only 5 to 10 miles-an-hour, so it’s not likely there will be a lot of galloping, snapping power lines nor will wind chills be extreme.