You are here: Home / Fires/Accidents/Disasters / Ice ‘exponentially worse’ than snow for road crews 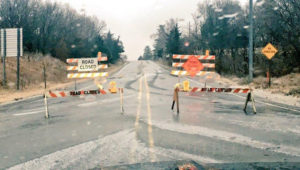 A road near Osceola covered in ice. Photo from State Trooper Alex Dinkla.

A county official from northeast Iowa says ice is “tremendously” more difficult for road crews to deal with than snow.

“Exponentially worse,” Lee Bjerke, the county engineer for Winneshiek County, says of dealing with. “Snow, I mean we just typically push it off and the temperatures are good enough where our material really works, but ice it really bonds to the roadways.

“The colder it gets, the harder it bonds and the more we have to do to try to get it off and you can ask any of the drivers –they’ll take feet of snow versus any ice at all.”

Bjerke says some gravel roads in the area are still “really touchy” and most of the county trucks with brine are deployed to paved roads.

“With the warmer temperatures, it should be a lot better going. We’ll see how this rain goes. It’s supposed to continue all day and continue to freeze, but start warming up later on in the week and that’ll be the biggest help for us, to loosen that ice up, so we can really break it apart.”

At about 10:30 this morning, the Iowa Department of Transportation lifted its “travel not advised” warning for northeast Iowa. There’s some flooding now reported in southeast Iowa. Earlier this morning the DOT tweeted a picture of a snowplow that slid off a highway near Postville. The text of the tweet said: “Ice doesn’t care who you are or how big your vehicle is.” The state trooper who took the photos sent his own tweet, saying: “Even the ice can take out the best. Stay home if you can.”

A trooper on patrol near Osceola tweeted that county roads are “100 percent ice covered.”