You are here: Home / News / State senator, an early Trump backer, won’t make it to inaugural 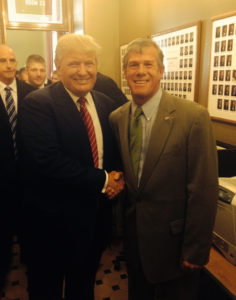 State Senator Brad Zaun is the only elected official in Iowa to endorse Donald Trump before the Iowa Caucuses, when there were more than a dozen other GOP candidates in the race for the White House, but Zaun’s not going to Trump’s inauguration this Friday.

“I’ve got a business commitment that will not allow me to go out there and I’m disappointed that I can’t go,” Zaun told Radio Iowa, “but business comes before politics and pleasure.”

Zaun said going to D.C. to watch a president be inaugurated is on his “bucket list” and he hopes to one day make the trip, perhaps for Trump’s second inaugural.

“I take a little bit of pride in knowing that I was the only elected official in the sate of Iowa that supported him in the Caucus,” Zaun said, “and had a lot of great experiences and spent a lot of time with President-elect Trump.”

Zaun was often called upon to be the opening speaker at Trump’s campaign rallies around the state. Zaun’s first choice for 2016 was Wisconsin Governor Scott Walker, but after Walker dropped out of the race, Zaun says he felt pulled toward Trump.

“It was just something that I sensed,” Zaun said. “When I decided to get behind him and I know it was very controversial at the time and I’m not going to defend some of the ridiculous statements that he made, but all-in-all, I saw the potential.” 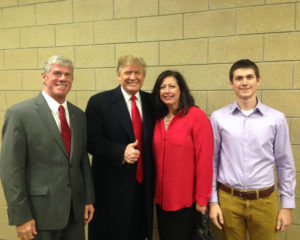 Zaun said he was “very surprised” as he talked with people in the crowd at Trump rallies.

“I was just amazed at how many people were new to the process or never voted and I saw how many Democrats and union people who were part of his rallies,” Zaun said. “You know, at the beginning I thought: ‘Well, it’s because he’s a TV star,’ but as we found out, Iowans and Americans were thirsty for someone who just tells it the way it is.”

Zaun said he “got a phone call” from Trump’s team to ask if he’d like to work in Washington, D.C., but he has “no interest” in leaving Iowa due to his business.

Zaun also wants to remain in the Iowa Senate since Republicans control the legislative branch of state government for the first time in the 12 years he’s been a state senator.