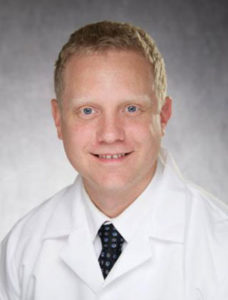 New federal guidelines recently released on the treatment of peanut allergies could be the start of a change in the way all types of food allergies are handled.

Doctor Ben Davis at the University of Iowa Hospitals and Clinics says the change in the treatment of peanut allergies came after research first released a couple of years ago. He says that research went against everything they had been following. Davis says recommendations that came out around the year 2000 advised that you delay giving kids foods that might cause allergies.

“What we are starting to realize now is that was poor advice. It looks like the earlier you introduce an allergenic food the better — the less likely you are to develop an allergy,” Davis says. Davis says the new guidelines advise introducing small amounts of peanuts to those who are four to six months old to help prevent peanut allergies.

“There’s some controversy and discussion within the medical community right now discussing if we should open this up to other allergenic foods. And likely it looks like we probably should. But the current recommendations focus on peanuts,” Davis says. The introduction of small amounts of peanut foods would be used to help those kids who may at high risk for an allergy.

“That would include patients who have severe eczema or have already been diagnosed with an egg allergy by that four to six months of age. And if that’s the case, then it’s recommended that those patients go to their local allergists to get evaluated for a peanut allergy,” he says.

Davis is Clinical Assistant Professor Allergy/Immunology and says the risk factors used to decide a treatment for peanut allergies could expand. “Definitely if they have severe eczema or if they’ve had an egg allergy. And I think the discussion is evolving that if they’ve had any food allergy we should likely be considering peanut skin tests,” Davis says. “And I think this research and the discussion is also going to evolve into other food allergy tests, and likely will focus on the top six allergenic foods.”

The top six most allergic foods are milk, eggs, soy, wheat, seafood and nuts. He says they account for 95 percent of allergies. Davis says you can ask your doctor about the treatment of peanut allergies if you see the risk factors.

He says talk to your doctor if your child has eczema or a food allergy or a family history of food allergy. Otherwise he says if they don’t have those risk factors you should ask your doctor about introducing the allergenic foods to your child at the age of four to six months.

Davis says there are currently phase one and two trials going on for oral therapy to treat peanut allergies that have shown some promise. “If we can slowly reintroduce that over about a year’s time — we are finding that a majority of those patients are able to tolerate peanuts after that year is up,” Davis says. “This is still in research phase and it is not currently FDA approved, so the only way we can offer that now is through those trials and we are hoping to attract one of those trials here soon.”