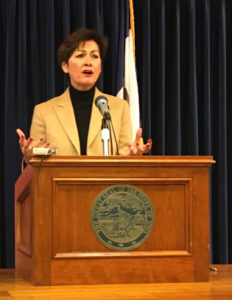 “Each year there’s a surplus that’s run within this block grant and so we believe we can provide the core services as well as making sure that taxpayer dollars don’t go towards clinics that provide abortions,” Reynolds says.

Now that Republicans lead both the Iowa House and Senate, the GOP is preparing to pass a bill that would “defund” Planned Parenthood. Medicaid patients would no longer get contraceptives or undergo tests at Planned Parenthood facilities. Those services had been financed with state and federal taxdollars, but with the “defunding” move, the state will have to shoulder all the costs.

“We believe that we’re going to be able to continue to provide core services for Iowans, for kids at risk, for kids that need them and we believe also that taxpayer dollars should not go to providers that provide abortions,” Reynolds says. “And so we’re going to continue to work with the legislature and make sure that we can provide services for both.”

The Branstad Administration is recommending that legislators use about $3 million in federal tax dollars earmarked for child and family services to cover the costs of contraceptives, cancer screenings and other reproductive health issues for Medicaid patients.

Critics say it’s wrong to divert the block grant money from programs for “at risk” kids in Iowa. Court officials say the number of juveniles entering Iowa’s prison system recently has been cut in half, because of programs targeted toward troubled youth.

Reynolds made her comments during a news conference in the governor’s office.