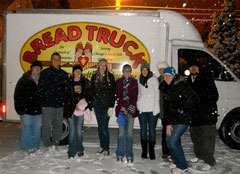 While Monday was the typical day of observance, students and teachers from Saint Ambrose University in Davenport will march today to honor the birthday of Martin Luther King Junior.

The so-called March to Remember is silent, by tradition. University spokesman Craig DeVrieze says a plaque will be unveiled today to honor students, professors and priests who fought for civil rights, as well as Charles Toney, the first black student to enroll at Saint Ambrose.

DeVrieze says, “He filed the first civil rights suit in the city of Davenport because he and his future wife tried to get an ice cream cone and they weren’t served.” Toney filed the lawsuit in 1942 against the Colonial Fountain. It took three years, but a jury decided their civil rights had been violated.

The plaque will be the eighth marker on Davenport’s Civil Rights Walking Tour. The university’s civil rights history includes the first NAACP chapter to be established at a Catholic college. Students also banded together to create an outlet for change.

“The League of Social Justice was a really cool thing because Cook’s Point was where a lot of the Hispanic immigrants settled in Davenport,” DeVrieze says. “They were living in tarpaper houses with no sewer and no water and basically, they were evicted. Eventually, students who were members of the League of Social Justice, they build houses with running water and sewer for this group.”

Today’s march will start at 1 P.M. at Cosgrove Hall, ending at Christ the King Chapel with the dedication of the new marker. This begins two weeks of scheduled activities on campus to celebrate the civil rights movement.