You are here: Home / News / Parts of the state are well below normal for winter snowfall 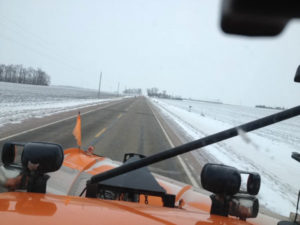 View from DOT snowplow camera in northwest Iowa in December.

We’re several weeks into winter and although it’s been extremely cold and icy at times, many Iowans have yet to see much snow.

State Climatologist Harry Hillaker says only a few inches of snow have fallen in areas of central and southern Iowa, which typically receives 10 to 12 inches of snow by this point in the season.

“Especially when you get down to the southwest corner of Iowa – places like Red Oak, Clarinda, Shenandoah and even down to Lamoni to the east – they’ve only received about two inches of snow so far this winter season,” Hillaker says.

Most of that snow fell in December. Sections of northeast Iowa, meanwhile, have been hit with some heavy snow storms. “Several places – Decorah, Osage, Cresco – that part of the state has received around 20 inches or more of snow, which is actually just barely above normal for that corner of the state,” Hillaker says.

Much of north-central and northeast Iowa has had snow cover since December 10. That snow will finally be melting away with the warmer weather that’s expected through the weekend. Hillaker says if it would’ve been a bit colder earlier this week, the rain and ice storm could’ve buried the state in snow.

“If it would’ve been ideal snow conditions with the amount of moisture we had, we probably would’ve seen roughly three to four inches of snow in northwestern Iowa and up to 10 to 12 inches in the southern part of the state,” Hillaker says.

This winter has been slightly colder than normal, but that’s about to change. “December ended about one-half-degree cooler than usual and January, up through the first 17 days of the month, is also one-half-degree below the average for the month,” Hillaker says. “But, we certainly have some very mild weather on the way for the rest of this week and maybe a little bit into next week as well.”

High temperatures for the remainder of the work week are expected to range from the mid-30s in northern Iowa to the upper 40s south.