You are here: Home / Health / Medicine / Some Iowa House members roll up their sleeves 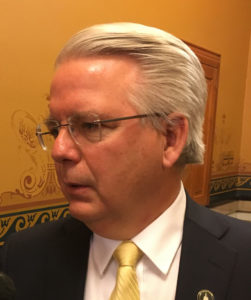 Legislators and staff at the statehouse are being urged to get a shot in the arm.

“This is the first time I’ve brought flu vaccine down to the capitol to administer and the main reason is because I’ve seen so many of my colleagues getting the flu,” said State Representative John Forbes of Urbandale, who is a pharmacist.

He’s operating a flu shot clinic in the capitol today.

“I had a couple legislators yesterday approach me and say: ‘Hey, do you have any flu shot vaccine left?’ I said: ‘Yes,'” Forbes said. “And knowing that I’ve had many members of the House come to me with multiple requests for over-the-counter medications and many of them have caught the flu, I thought: why not bring the vaccine to the statehouse and reduce the risk of the rest of us getting the flu, too?”

Forbes said the flu season lasts through April, so it’s not too late to get the shot.

“This year has really been a pretty good year on matching of flu strains to the vaccine, so the more people that get the flu vaccine, the less likely we’ll see an outbreak here in the state of Iowa,” Forbes said.

The flu bug is sweeping through the statehouse. House leaders say a handful of members are out with the flu. Forbes says having most legislators leave Des Moines to go home on the weekends, then return to the capitol for the work week creates, well, here’s the pharmacist’s explanation:

“This place is a cesspool of bacteria during the legislative session and so if we can do anything to reduce that risk of us getting sick, I’m all for it 100 percent.”

Forbes isn’t charging for the flu shots he’s giving at the statehouse today. Two Drake University pharmacy students who’ve been trained to give the shots are assisting him.