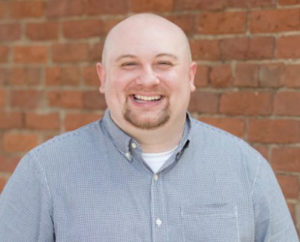 Iowa Democrats have a new chairman. Thirty-three-year-old Derick Eadon of West Des Moines was elected to the post on Saturday.

“First order of business is to get to work on organizing and, also, holding Republicans accountable,” Eadon told reporters a few minutes after he won the job.

“I was really lucky to be one of those first staffers that Barack Obama hired here in Iowa. My first paycheck on the Obama campaign actually bounced, it was that early,” Eadon said.

In 2009, Eadon became state director for “Organizing For America” — a group formed to mobilize Obama supporters in the 2010 midterm elections. Eadon recently has been working as a political consultant, but he’s closing his firm to work full-time as chairman of the Iowa Democratic Party. Eadon is promising a “different approach” and a “positive vision” for the party.

“2016 wasn’t just a bad year. It was a year that a lot of our flaws in how we operate as a party have been exposed,” Eadon said in remarks to the Iowa Democratic Party’s state central committee before Saturday vote. “…We shouldn’t avoid a fight on the issues. We should start it.”

The Democratic Party’s state central committee used a complicated “ranked choice” system to select their new leader. It means Eadon is unlikely to have been the first choice of all, but he got enough high rankings from both of the feuding Hillary Clinton and Bernie Sanders wings within the Democratic Party to win.

“The issues we face with the Republicans are far bigger than the differences we have,” Eadon told reporters.

Six other Democrats were seeking the post Eadon now holds.  All seven candidates were given four minutes to make their final pitch.

The Iowa Republican Party’s state central committee will meet on Saturday the 28th and the group is expected to elect Jeff Kaufmann to another term as the Iowa GOP’s chairman.