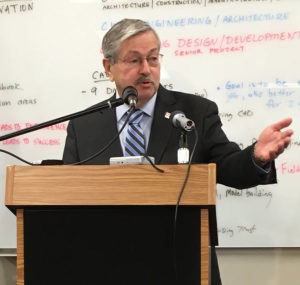 Governor Terry Branstad today said “concerning” reports have emerged about cases involving his Department of Human Services, but Branstad said he will not “second guess” the agency’s response thus far.

Investigators recently determined some staff at the state-run Glenwood facility where patients with profound mental disabilities live were physically and verbally abusing the patients. During his weekly news conference, Branstad was asked how that culture of abuse was allowed.

“That’s a good question and that’s the reason why significant changes have been already made,” Branstad replied. “They’ve added additional supervisors, I think, on the evenings and weekends.”

Six employees at the Glenwood facility were fired, six quit and five others have been disciplined, but no supervisors were disciplined.

Branstad says the Department of Human Services has done an extensive investigation and says there’s also  additional review now being done by the Ombudsman’s office and elsewhere. “We want to make sure that everybody is treated well and when there is misconduct it’s important that be ferreted out.”

The governor told reporters the department has taken the action they believe is appropriate.

“If there’s additional action that should be taken, I’m certain they’ll do what needs to be done, but I’m not one to second-guess,” Branstad said. “I, instead, want to make sure we’re doing all we can to make sure to protect the safety of people that are in the custody of the at Glenwood or Woodward or wherever they might be.”

Branstad said the majority of employees at the Glenwood Resource Center are “hard-working, conscientious people” who do a good job.

“But you had a few that didn’t and they were able to basically convince others to keep that secret,” Branstad said. “Eventually that was discovered and action has been taken to dismiss those people.”

Critics are also questioning how the DHS is tracking foster children who are adopted. A 16-year-old central Iowa teen died this past October of starvation, five months after a neighbor called authorities with concerns about her welfare. Another former foster child in central Iowa ran away after she says she was beaten and lock in the basement by her adoptive parents. Branstad says there’s a “delicate balance” in these kind of cases.

“When you have thousands and thousands of people, when mistakes are made, they need to be investigated and if there’s wrong-doing or employees in the department who are not doing their job, they need to be disciplined, and they have,” Branstad said, “but that also needs to be made public and not hidden.”

Branstad is calling on legislators to remove privacy restrictions and make records about state employee firings available to the public.

(This story was edited to indicate that it is the Ombudsman’s office is doing a review of the problems.)