You are here: Home / News / Northern Iowa could get a healthy dose of snow 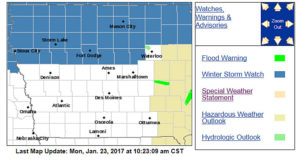 Forecasters say a snowstorm is headed for northern Iowa that could dump up to 8 inches of snow on the region by Wednesday afternoon.

Meteorologist Kenny Podrazik, at the National Weather Service, says the much of Iowa will see at least some precipitation from this storm system. “We’ll see rain and snow develop during the late morning hours tomorrow and the rain-snow mix line will be along the Highway 20 to Highway 30 corridor,” Podrazik says. “Anything south of that is going to be more rain. Further north, toward the Minnesota border, you’ll see the bulk of the snow.”

Anyone who will need to be traveling across Iowa’s northern third during the next 48 hours may have to rethink their plans. “Snow’s going to really start to accumulate during the late afternoon tomorrow and into tomorrow night,” Podrazik says. “It’ll really impact rush hour traffic across northern Iowa. The winds may really start to develop during the overnight hours toward Wednesday morning, so that’ll cause some blowing and drifting snow and probably some visibility restrictions as well.”

Predictions call for the deepest snow to be farther north and nearly 40 Iowa counties are now under an advisory. “We have a Winter Storm Watch out along the Highway 20 corridor northward, so we’re looking at anywhere from four to eight inches in that area,” Podrazik says. “From Estherville to Mason City, we’re looking at 6-8 inches and from Fort Dodge, that area, we’re looking at a 4-6 range.”

Cold weather is forecast to remain after the storm passes, with highs statewide mostly in the 20s and 30s and lows in the teens and 20s.