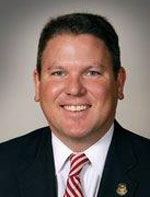 Friday nights should be reserved for high school football in Iowa according to a member of the Iowa House.

“In 2016, the Big Ten had an idea to have football games held on Friday nights,” says State Representative Peter Cownie of West Des Moines.

He’s sponsoring legislation that would forbid the Hawkeyes from playing in Iowa City on a Friday night. The Cyclones and Panthers couldn’t play a “home” football game on a Friday night either if his bill becomes law.

“I played high school football, wonderful memories like tens of thousands of other Iowans,” Cownie says. “That’s a tradition that needs to be preserved.”

Iowa has offered to host a home game to kick off the 2018 season, on the Friday of Labor Day weekend.

“I think this would create an unfortunate choice that a lot of Iowans would have to make then,” Cownie says. “And I feel strongly about it and I filed the bill.”

Cownie says Iowa communities of all sizes “come together” on a Friday night to cheer on the hometown team — and having the University of Iowa host a game on a Friday night would siphon off a significant number of fans.

“It’s all very important, no question about it,” Cownie says. “Ticket sales would be hurt by it.”

And Cownie says many schools use those Friday Night ticket sales to finance the local football program. Cownie, by the way, was the quarterback for Dowling Catholic High School in West Des Moines in the late 1990s.

Representatives of the board that governs the University of Iowa are officially registered as “undecided” on Cownie’s bill. Last November the Big Ten announced its new TV deal includes a package of six Friday night games per season during each of the next six seasons. Penn State has announced it will not participate.