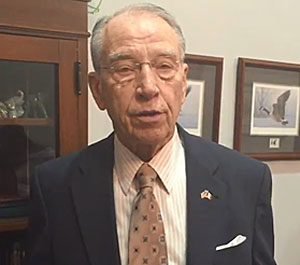 Republican Senator Chuck Grassley suggests it may be April before a new justice joins the U.S. Supreme Court — but it could be longer if Democrats in the U.S. Senate decide to use the senate’s “filibuster” and block President Trump’s nominee.

“Republicans did not filibuster two vacancies that Clinton appointed in his first term. We didn’t filibuster two vacancies that Obama appointed in his first term, so comparing apples with apples, this is Trump’s first term and there’s one vacancy now,” Grassley says. “We should expect the same privilege from Democrats being in the minority in the senate like Republicans gave benefit to Democrat presidents.”

Grassley leads the senate committee that will hold hearings for whomever Trump nominates.

“There’s usually a 30 or 40 day period of time for every member of the committee to go through his, in this case it would be decisions that a circuit judge makes because they’re all circuit judges, at least the names that I’ve heard,” Grassley says.

The president plans to make his decision by Friday and will reveal the name of his nominee next week. The ninth seat on the U.S. Supreme Court has been vacant since Justice Antonin Scalia died last February, as Grassley and other Republican senators refused to consider President Obama’s nominee.

Grassley was among four senators who went to the White House yesterday to meet with President Trump. Grassley says they had a “general” discussion about the supreme court nomination process.

“Nothing specifically said about an individual,” Grassley says.

During the campaign, Trump released a list of 21 people he would consider appointing to the nation’s highest court. Once members of Grassley’s senate committee have spent about a month reviewing the record of whomever Trump nominates, Grassley expects that person to appear before the panel for at least a full day, then opponents of the choice will be given a day in the committee’s hearing room to respond.

Grassley is in Iowa today (Wednesday), visiting the statehouse and holding meetings. He’s skipping a retreat in Philadelphia for Republican members of congress. Grassley says he’s been to enough “retreats” in the past and he doesn’t like the word “retreat” either. He says “retreat” signals “defeat.”